Well I had ordered a couple of things from the Asos sale. A dress I had loved since it appeared on the website and a top that I added to my basket as it looked different from anything that I already own and was only 8 pounds. Oh I do love a bargain.

You will be seeing photos of the top some point soon as although it is sleeveless (which I normally avoid like the plague) it's rather cool. Nice pattern and with cleavage options :) Will also go with my wide leg pants from Very that I'm struggling to find anything to wear with that I like.

The dress however was a no go as while it looks lovely on the model on me it looked like an elasticated rubbish bag. Most disappointing thing I've had from them but to be fair it was due to me not being realistic about how my body shape would suit a dress in that style.

It also had to compete against the dress I got BNWT from Ebay. It's by Next, it's also sleeveless but has ruffles on the hem. Has black in the fabric so can wear black leggings with it and am already planning my winter boot, tights and long cardi combination with it. Note lack of legs in pic. Was experimenting with putting camera on bookcase to take photos. Which is why you get lots of messy spare bedroom (it's the library, my dressing room and excess toy room) and no legs.

Go Next! 7.50 pounds!!! Cardi an old one by Monsoon. Fake Pearls Monsoon mega sale and leggings not seen by Primark.

Have a lovely week!!! 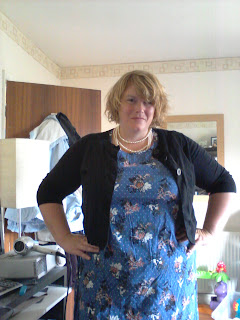 Email ThisBlogThis!Share to TwitterShare to FacebookShare to Pinterest
Labels: asos Next fat fashion