Well I've been spending some quality time doing some reading about fat acceptance on the web, as well as doing lots of virtual window shopping!

Found a great post which I really identified with from the wonderful blog by Fat Heffalump. It's a brilliant piece about not judging other people by their appearance, esp other fatties.

I'll admit that I've done it, I was brought up to do it. It was like a game my mother and I used to play. Every time I saw another fat girl I used to point her out to my mother and I suppose hope she would say that  I was thinner. Luckily my husband won't play and as I've gotten older I've realised that putting someone else down because of their weight is just another way of putting myself down. So, I've stopped that shit.

I've seen another post on another fat fashion blog (no idea where) which was along the lines of fat fashion is cool but some women need to dress better because fat rolls are bad and should be disguised. So...it's ok if you manage to hide your fat under a empire-line dress, but not if your fat is anyway on show? That's ok? So, you can be fat as long as you are a good fat person and dress like a fat person should in baggy t and muumuu? Even the most flattering thing in the Universe isn't going to hide my lard. Nothing is that flattering.

I do think that I feel better about myself if I wear certain clothes rather than others (like anything that shows my legs) but if I suddenly decide to wear short shorts then all power to me and why should anyone give a damn? Therefore why should I judge people about the acceptability of their outfit?

So in conclusion my resolution is not to think Oh My God what is she wearing but focus on the fact that all of us should dress for only ourselves. What I really want to see when I'm out and about is people proud of their appearance and comfortable in their own bodies, regardless of their size or shape.

And sort of related to this I have decided to stop being negative about my wedding and the photos from that day. It wasn't the day that either of us wanted but because of family issues it was basically the day we were stuck with. Ok, I'm not wearing the dress I would have otherwise have chosen but I didn't end up making much of any effort. Anyway, here's me. Dress from Evans. 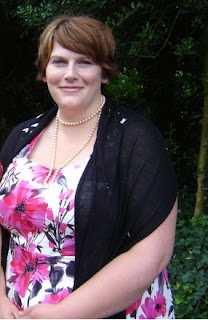 Oh and that isn't dandruff, it's confetti!
Posted by Eclectica at 05:00